toddler terrors happen to everyone…it’s how you deal with them that matters! 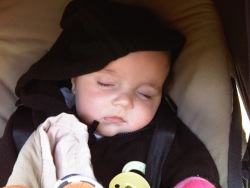 today was one of those mornings where i wanted to lock my toddler in his room and leave him there.  in fact he was probably safer in there, than out here with me!!  argh!!  sometimes they know exactly how to push you to the very edge and when they get you there they somehow know it.  they then back off and you of course have a sense of guilt from having to discipline them.

every child has tantrum issues, gets frustrated, acts inappropriately and so forth, but it is how you, as the parent, deal with these issues that really matters.  kids are human. they are testing their boundaries and limits.  they are learning about their independence and place in this world.  in experiencing all these things they respond to them and not always in the most desired way.

today i was definitely upset with hudson.  i always spend my time with him.  lots of time and attention.  he is a very bright little guy because of all of this time i have dedicated to him, but at the same time he isn’t all that independent because he is so used to having an adult play, talk, and work with him.  it is sort of a catch 22!  my friend was over today and her little one is 10 days younger than hudson.  she was discussing all the behaviour issues she is currently dealing with and of course hudson didn’t want me to chat with her.  it is a rare occasion that i am chatting with another adult and he doesn’t have my attention.  so of course he handles it very poorly.  sort of like when you get on the phone they just know to act up! he got frustrated and screamed, which is a “no warnings” time-out.  i marched him straight up to his room to his time-out spot on the floor.  he was loud, crying, pounding the closet doors and so on.  i told him i wasn’t coming up until he took his quiet time-out.  he did and then i went up.

it is so important to disucss after each time-out why he/she was there in the first place.  chat about the incident and explain why it isn’t okay behaviour and then have them apologize for their actions.

we then came back down, he became frustrated immediately and he was sent straight back upstairs.  again another time-out and follow up conversation.  by now he was feeling very sad about his actions and knew that i was very disappointed in them.  my friend told me not to feel bad and tried to tell me that hudson was so advanced because of all the time i spend with him.  i agree, but it is no excuse for his behavior.  i guess this is a sign that i need to encourage more independant play time at home and structure a time for this into our daily schedule.  it is a learned bbehaviour and i need to help him grasp the concept.  i told hudson today was a nap day (even though he very rarely naps anymore) because little boys who act the way he was acting are definitely too tired to stay awake and play.  he cried but didn’t resist.  he’s napping as we speak and i’m hoping for a better afternoon!

days like this don’t happen often because i take the time to deal and re-deal with the issues until the proper behaviour is learned.  it takes a lot of time and patience, along with consistency!! you have to, have to, have to always follow through.  this is how they learn their boundaries and therefore how you create a well behaved human being.

parenting can be frustrating at times, but by dealing with the issues as the arise, your happy times should out-weigh the frustrating times by a 10-fold!  i’m taking deep breaths and getting ready to erase the morning and start over!! at least that’s my hope!

Get Your Kids to Cooperate with The "Golden Time" Formula