kids sharing a room doesn’t have to mean no sleep! 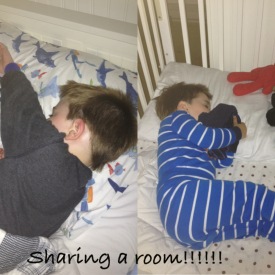 my deepest apologies to all my readers for not writing this summer!  no excuses, but i did have a bit of a crazy summer with a flooded basement, broken washing machine, my vacuum bit the dust, hudson almost lost a finger at camp (literally), and the list goes on!  But…like i mentioned, no excuses! this summer we spent some time at the cottage and I got my idea for this post due to the fact that we decided to finally try and get hudson (4 years) and beckett (2 years) to share a room.  Selfishly we attempted this challenge, so we wouldn’t have to suffer 3 weeks on the living room pull out couch!

the boys have never shared a room with anyone…including us!  never have they slept in our beds or us in theirs.  all they know is to sleep alone.  when we mentioned to them the idea of sharing a room together they both smiled and thought it sounded like fun!  So here it goes!  we all began to take the crib apart, which was currently in the master room next to the amazing king bed where no one slept as we were out on the pull-out, and moved it into hudson’s room.  keepi in mind the room they are about to share is rather small and the crib is basically right next to hudson’s bed.  no hiding from each other, just in plain site to see and hear and bother one another!

we knew it wasn’t going to be smooth sailing from the get go, but we had high hopes!  or at least our backs had high hopes as they didn’t want to suffer one more single night lying across bars on the pull-out.  on night one we decided to read hudson his books on our bed and put him to sleep in there to begin.  then when we were ready to sleep we would take him pee-pee and transfer him over to his bed with beckett already asleep.  the reason we did this is because beckett likes to sing and chat in his bed to wind down his day before he falls asleep.  so we went with this plan and both boys went right to sleep.  at 10pm we did the transfer mission and got hudson into his bed without waking up beckett.  so far so good!  until 2:30 am when all hell broke loose and the shit hit the fan!  hudson had to pee and not ever sharing a room before wasn’t used to sneaking out.   on accident he bumped beckett’s crib which abruptly woke becks and he burst into tears.  followed by hudson bursting into tears and the level just escalated from there.  christopher and i standing there in the middle of their room with the two of them crying uncontrollably.  finally i had to be very firm and let them know they could cry all night but they were going to go to bed.   their choice!  i gave them each a sip of water,  they calmed down, knew i meant business and figured they better just go to sleep.  Which, they did.  or at least we thought they did until hudson started to cry again because he needed a tissue and then beckett started crying again.  i went in delivered the tissue and once again, firmly, stated to them to close their eyes and go to bed.  Which, they did!  i, of course, didn’t as i lay in our bed intently listening and waiting for the next disaster and for the crying dominos to begin….but, it didn’t!  the morning came early as i heard them chatting around 5am and beckett asking hudson, “what time is it hudson?” in a loud voice.  followed by hudson whispering, “beckett you have to be quiet in the morning and it’s not 6 o’clock yet.  we can’t get mommy and daddy until the clock says 6”  these shenanigans went on and the laughter between the two melted our hearts as they bonded together in their shared room at the cottage!

night two arrived and we were back at it again! our anxiety was off the charts as we hoped we were doing the right thing by trying to get them to share a room.  we ran the same drill by putting hudson to sleep in our room first and all was a success until the middle of the night pee.  crying dominos again, but it didn’t last as long.  early to rise again, which created two very over-tired boys the next day.  the accumulation of lost sleep due to sleep over camp was starting to take it’s toll!

on night three we opted to make some changes!  we decided it would be best to just go balls out and put them both to bed in the same room at the same time and hope for the best!  if we were going to train them to share a room i figured we might as well actually train them to share a room.  we weren’t going to tip-toe around room sharing but rather take it more like a stomp!  so here we are before bedtime, reminding hudson that we are going to go sleep in the room with becks after books and all is okay until the moment arrives to actually go in! on our way for our final pee-pee before hitting the sheets, Hudson goes into full on panic mode.  Not one of those little melt downs or smallish tantrums but a full on mental break down.  This is so out of character for Hudson as he rarely has a crying fit or tantrum.  This however was off the charts.  It included screaming, crying, hyperventilating, kicking and hitting me (new as well) and complete loss of control over his own body.  I guess you could say he had a total out of body experience.  Something took over him!!  With this we didn’t back down.  It’s so important to stick to what you say you are going to do and follow through.  This will create a sense of ease for your child whether you feel so at the time or not.  Therefore, I firmly stated to him that he was going to sleep in there and he could either cry all night in there or sleep in there.  It was his choice, but there was no choice on whether or not to sleep there.  With this he knew once again that I meant business!  Both Hudson and beckett know that what I say goes and there are no if, ands or buts about it!  Therefore Hudson took a few deep breaths and crashed in a matter of nano-seconds.  He may have been asleep prior to actually getting his head on the pillow…poor little guy.

From this point on things got better each night.  Hudson tried to fuss the next night about falling asleep in beck’s room and not in ours, but like I mentioned before what I say goes!  I stated to him that he was going to sleep in there and with that he knew.  As for all the other bumps, in the sharing a room battle, started to smooth out as well.  Hudson got better at sneaking out quietly to go to the washroom, becks got better at falling back to sleep if Hudson accidentally woke him, and in the mornings they were having a ball together in their room!!  Hudson knows to stay in his room and look at books until the clock says 6:00 am and therefore, he would put books in beckett’s crib for him.  They would giggle, chat, and bond!  We would lie in the room next door smiling as our two little guys became closer as brothers and friends!

Teaching your kids to share a room while on vacation or permanently isn’t just a 1 night thing.  It takes time, patience, firmness, and complete and utter follow through!!!  Don’t give up just because night one is a disaster.  Stick to it and you’ll be amazed how quickly they learn!  Like I always say, they are so much smarter than we often give them credit for!!

Get Your Kids to Cooperate with The "Golden Time" Formula